I'm well aware of the fact that you bring your time to painting, but video brings its time to you. WC How do you feel about that? ... They were telling you what to look at, which irritates me. We're not doing that—you've got an enormous ...

Since 2000, The Brooklyn Rail has been a platform for artists, academics, critics, poets, and writers in New York and abroad. The monthly journal’s continued appeal is due in large part to its diverse contributors, many of whom bring contrasting and often unexpected opinions to conversations about art and aesthetics. No other publication devotes as much space to the artist’s voice, allowing ideas to unfold and idiosyncrasies to emerge through open discussion. Since its inception, cofounder and artistic director Phong Bui and the Rail’s contributors have interviewed over four hundred artists for The Brooklyn Rail. This volume brings together for the first time a selection of sixty of the most influential and seminal interviews with artists ranging from Richard Serra and Brice Marden, to Alex Da Corte and House of Ladosha. While each interview is important in its own right, offering a perspective on the life and work of a specific artist, collectively they tell the story of a journal that has grown during one of the more diverse and surprising periods in visual art. There is no unified style or perspective; The Brooklyn Rail’s strength lies in its ability to include and champion difference. Selected and coedited by Jarrett Earnest, a frequent Rail contributor, with Lucas Zwirner, the book includes an introduction to the project by Phong Bui as well as many of the hand-drawn portraits he has made of those he has interviewed over the years. This combination of verbal and visual profiles offers a rare and personal insight into contemporary visual culture. Interviews with Vito Acconci, Ai Weiwei, Lynda Benglis, James Bishop, Chris Burden, Vija Celmins, Francesco Clemente, Bruce Conner, Alex Da Corte, Rosalyn Drexler, Keltie Ferris, Simone Forti, Andrea Fraser, LaToya Ruby Frazier, Suzan Frecon, Coco Fusco, Robert Gober, Leon Golub, Ron Gorchov, Michelle Grabner, Josephine Halvorson, Sheila Hicks, David Hockney, Roni Horn, House of Ladosha, Alfredo Jaar, Bill Jensen, Alex Katz, William Kentridge, Matvey Levenstein, Nalini Malani, Brice Marden, Chris Martin, Jonas Mekas, Shirin Neshat, Thomas Nozkowski, Lorraine O’Grady, Genesis Breyer P-Orridge, Joanna Pousette-Dart, Ernesto Pujol, Martin Puryear, Walid Raad, Dorothea Rockburne, Tim Rollins and K.O.S., Robert Ryman, Dana Schutz, Richard Serra, Shahzia Sikander, Nancy Spero, Hiroshi Sugimoto, Sarah Sze, Rirkrit Tiravanija, James Turrell, Richard Tuttle, Luc Tuymans, Kara Walker, Stanley Whitney, Jack Whitten, Yan Pei-Ming, and Lisa Yuskavage Special thanks to Furthermore, a program of the J.M. Kaplan Fund, for their support of The Brooklyn Rail. 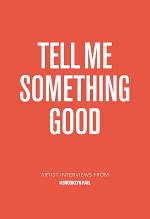 Tell Me Something Good

Authors: Jarrett Earnest, Lucas Zwirner, Phong Bui
Categories: Art
Since 2000, The Brooklyn Rail has been a platform for artists, academics, critics, poets, and writers in New York and abroad. The monthly journal’s continued appeal is due in large part to its diverse contributors, many of whom bring contrasting and often unexpected opinions to conversations about art and aesthetics. 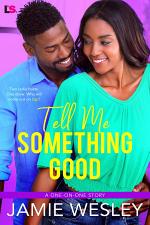 Tell Me Something Good

Authors: Jamie Wesley
Categories: Fiction
It's not that Tate Grayson is impulsive, it's just that he thinks life is too short to take seriously. That's why he sold his multimillion-dollar company and spun his fanaticism for sports into a radio talk show. Tate also knows that love is fleeting as well--a fact he never resists 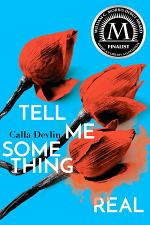 Tell Me Something Real

Authors: Calla Devlin
Categories: Young Adult Fiction
Three sisters struggle with the bonds that hold their family together as they face a darkness settling over their lives in this “one of a kind” (Kirkus Reviews, starred review) debut novel that’s a finalist for the William C. Morris Award. There are three beautiful blond Babcock sisters: gorgeous and 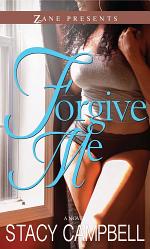 Authors: Stacy Campbell
Categories: Fiction
Aruba Dixon has hit rock bottom - after two years of marriage, her second husband has died of Lou Gehrig's disease, and she finds herself depressed and wanting to end it all. A botched suicide attempt leads to her parents and her ex-husband beginning to interfere in her life, neither 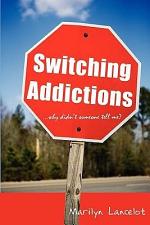 Switching Addictions . . . Why Didn't Someone Tell Me?

Authors: Marilyn Lancelot
Categories: Self-Help
"Switching Addictions" reveals snapshots of Marilyn Lancelot's life before she realizes it is possible to switch one addiction for another. Her first book, "Gripped by Gambling," chronicles her descent into compulsive gambling, followed by years of recovery. This book builds on that material, following Lancelot as she so easily slips

The Higher Education of a Cottonmouth

The Heat of Betrayal

Rights of Personality in Scots Law

Nobody Will Tell You This But Me

Under Fire (The Chronicles of Kerrigan Book 5)

Downfall: A Brady Novel of Suspense

As Close As Sisters

A Hacker, I Am

For the Love of Liverpool

Neurobiology of Feeding and Nutrition